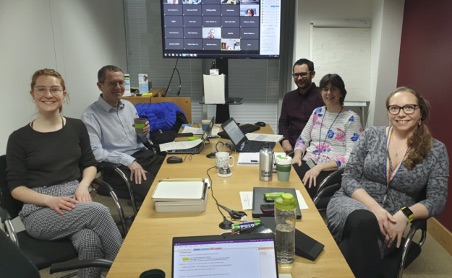 Some of the EUCP Coordination team at the Met Office, Exter, UK, tuning into the remote General Assembly on Zoom on March 10th 2020.

Just as we looked forward to our third annual General Assembly (10th-12th March), the landscape of international collaboration began to change dramatically as the COVID-19 situation quickly impacted those of us across Europe and beyond. Originally planned to be hosted by our partners Deltares in Delft, Netherlands, plans were swiftly re-arranged towards a remote meeting on ‘Zoom’. More than 60 EUCP colleagues joined us across 2 days of presentations and discussions.

On day one, we heard a number of highlights of the projects’ science. These included latest results from the new multi-model kilometers scale resolution climate projections for Europe, which are being run by a number of EUCP partners in work package 3 (WP). These multi-model simulations allow us to compare performance between models at this very-high-resolution for the first time, and to understand the uncertainty in future projections of very fine-scale processes such as extreme rainfall.

We also heard about some novel applications of European climate projections to climate impacts case studies. For example, European climate projections were used to better understand the uncertainty in the amount of coastal erosion we might expect at vulnerable coastal sites in Europe. Another novel application demonstrated how EURO-CORDEX projections are being used to assess whether recently observed ‘wind droughts’ in some parts of Europe might indicate a long term climate change trend.

The project partners had been looking forward to some important discussion and workshop sessions at the General Assembly where we would share recent progress and make plans for next steps in some key cross-work package activities. On Day 2, we set aside some time for more interactive sessions. Some of these key discussion topics included the following questions:

While we missed the chance to see our EUCP colleagues face-to-face for lively science discussion, debate and socialising, we found some real advantages of the remote-meeting format. As well as reducing our carbon emissions, the remote format allowed some of our colleagues to join who would not have been able to travel to a face-to-face meeting. We learned a lot about how effective remote meetings can be, and we hope that future EUCP meetings will be able to make the ‘best of both worlds’ by combining face-to-face and remote participation.

Previous Engaging users: Consultations with members of the Multi-User Forum
Next Research highlight: What does the future hold for climate-vulnerable industries?